Voyages: to the New World and Beyond 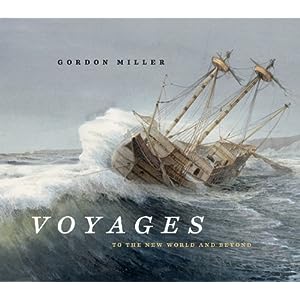 This is a book about ships, large and small, and of their experiences mainly in the line of exploration and discovery. From the mid-fifteenth to the mid-nineteenth centuries the world’s oceans and distant annexes were sailed by enterprising mariners on commercial and naval ventures. The global reach of Europe was soon achieved, and trades in essential and exotic commodities brought into existence a worldwide commercial network that underpinned diplomatic struggles and, on many instances, wars and testy rivalries for control of distant shores and hitherto unknown peoples. Much has been made of the Mediterranean, the Baltic, and the Indian Ocean as locales for the unity of peoples on their littorals to establish, say, in the first instance, a Mediterranean civilization.

With this book we are taken to broader seas, where more adventurous mariners with better ships found an opportunity in their individual lines of work. Gordon Miller, marine artist of unique artistic skills happily matched with an unbending determination that what he paints has authenticity, has selected watercraft from the great ages, beginning with the Norse, moving through the age of the Hanseatic League, progressing through to the vessels of Columbus, and advancing to the ships that brought Cartier and Drake to the shores of North America, east and west respectively. He then proceeds into the great age of discovery, notably introducing the search for breadfruit at Tahiti, moving on to portray vessels from San Blas that sailed to establish San Diego, San Francisco and Nootka, advancing to show Spanish vessels in high Alaskan latitudes, and venturing to show merchant shipping in the sea otter trade sailing Hawaiian waters, or passing through a harbour full of junks in Whampoa Roads, Pearl River, Canton.

But Gordon Miller’s love is the collectivity of sailing ships that added so much to European knowledge of the Northwest Coast of North America in the late eighteenth century. He gives pride of place to Spanish ships, such as Francisco de Eliza’s San Carlos and José María Narváez’s Santa Saturnina. These vessels, and others, made an incomplete examination of the Strait of Juan de Fuca then pointed the way into the Strait of Georgia, identifying or confirming Haro Strait and Rosario Strait (the outside passages, so to speak, of the San Juan Islands). Diminishing food supplies and hostile First Nations deterred further progress, and it was not until the triumphant year 1792 that Galiano and Valdes and Vancouver and Broughton made their fuller examinations, disproving claims to a North West Passage in these latitudes, and confirmed by Alexander Mackenzie, first across the continent the following year. The Americans make their appearance, notably in the form of Robert Grey’s Columbia Rediviva, and there is a lovely view of the launch of the Adventure at Meares Island in early 1792. Miller has painstakingly detailed these explorations under sail, and then we get an indication of the future, and of steam power, with several views of the Hudson’s Bay Company’s Beaver, one lying off of Fort Rupert, northern Vancouver Island, that place of such evanescent commercial activity but longstanding residence of the Kwakwaka’wakw First Nation. Always for those who study the age of sail there is regret, even remorse, that so little was done to preserve these and other ships for posterity. But Gordon Miller has two concluding views that are, in their own way, testimonies to a world that we have lost. One is the clipper Thermopylae (rival to the Cutty Sark) which at one time called Victoria home port. The other is the Pamir, last seen on the Northwest Coast in 1946. With this the age of sail had closed, except for the yachting age which was to succeed it. Sailing for commercial reasons or navigating for scientific results had given way to new passions still with us.

With concern for accuracy matched with artistic beauty and discerning proportion, Gordon Miller’s paintings are a delight to view. This book is a tribute to a life of hard and dedicated work. His paintings grace many fine collections and are housed in many museums. In addition, you will find his paintings reproduced in many a book on Northwest Coast history, an enduring tribute to their accuracy and compelling attraction.