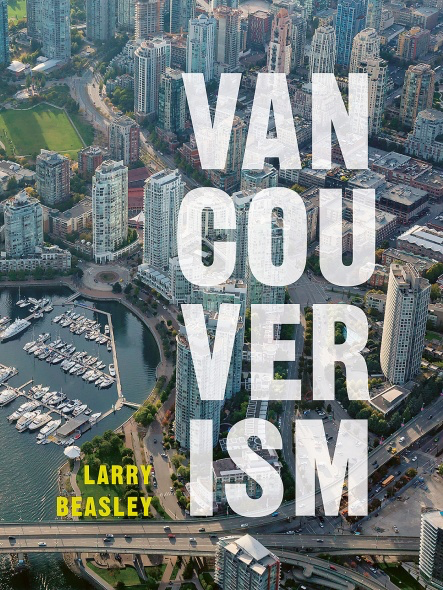 It’s best to start any study with a clear, concise, and irrefutable sentence. But “Vancouver is a place” is taking that axiom too far. And, as anyone who knows horses will tell you, a place is not a win.

Larry Beasley arrived at Vancouver City Hall in 1976 and in 1994 became Co-Director of the Planning Department. The period in between is pivotal in the city’s history. Population growth, globalization, an embryonic sustainability movement, and deindustrialization arrived in the 1980s and set City departments loose with new mandates and tools. City staff outlast all but the hardiest civic politicians: Beasley spent thirty years at City Hall. It is possible only for someone like Beasley to tell a story like this one, highlighting continuities and changes over a longish haul. From his perspective, it was transformative of the cityscape and a breakthrough in planning processes. Vancouverismis thus an account, an explanation, and a validation of a civic planning culture that favours density, win-win outcomes, proximity to services, innovations in public transportation, and a rich culture of neighbourhoods.

The focus is very much on what Beasley calls the “megaprojects” on Coal Harbour and around False Creek. Vancouverism in this sense doesn’t really stretch into other neighbourhoods except insofar as it models good (let’s not say “best”) practices. Downtown freeway proposals were gassed in the early 1970s; planners thereafter were obliged to think about how to achieve and manage growth and mobility in different ways. Foreshore mills and shipyards were swept away and the City found itself with a largely unanticipated endowment of vacant property bracketing the city core. Using the high-density and lively West End as a model and seeing the limits of detached single houses for families, City planners opted to densify the centre, lace it up with rapid transit, and reconstitute it as a space that welcomed diverse households and economic activities. “Vancouverism” is, thus, a highly regulated rejection of sprawl, an ode to high-rise living and busy sidewalks, an appreciation for light and air, and a process of negotiation, regulation, and aspiration. Vancouver might have evolved very differently after Expo ’86; Vancouverism ensured that what Doug Coupland called ‘the city of glass’ didn’t turn out so badly. To his credit, Beasley lives in a neighbourhood he helped design – unlike NYC’s Robert Moses (who built freeways but never drove) or Vancouver brutalist Arthur Erickson (who lived in an Arts and Crafts house) – and that’s an important testament in its own right. It is, however, one thing to plan a city; it is another to write a book about it.

Beasley was, perhaps, ill-advised to try to make this a single work. There are at least three books between the covers. It is a memoir, an homage, a handbook, and a suite of recommendations. That’s just too much. Aesthetically and intellectually this scale leads to repetition, contradiction, unclear purpose, and difficulties for the user. Beasley is, for example, mad-keen for lists, including: Six Principles (58-63); Ten Parameters (112) – which don’t seem to survive more than sixteen pages; Five “Friends of the Heart and of the Brain” (89-100); Four Primary Features of Approvals (343-4); and Three Elements to Megaproject Planning (352-3). Many of these overlap but whether and how they might operate concurrently is entirely unclear.

What could make sense of all this is a few detailed case studies. Even one blow-by-blow of a significant development process from conceptualization and zoning through application, negotiation, consultations, approval, construction, and final inspection would be nice. If client privilege requires redactions, fine, but without some details we are left to take Beasley’s word for it that developers’ worst instincts were kept in check and the public interest was well served. Chapter 9 nearly takes us there. It deals with the processes that govern Vancouverist planning and could have stood alone as a very good and useful book on the practice of Vancouverism. What Chapter 9 also reveals, however, is the extent to which Beasley’s world is shot through with snobbery. Beasley notes that Indigenous participants in city-making have “now…found a positive way to position their interests in land and development,” a statement that drips ignorance as regards how local Indigenous communities were systematically stripped of land and opportunities to participate. (371) He also overlooks repeated expressions of community frustration, saying that “even one such protest [over inadequate or inauthentic consultation] is a blunt indictment that city hall has dropped the ball, which should instigate an immediate reform.” (363) Long past due, long past due. The use of three-dimensional models of proposed structures “make it so easy for average people to understand what is going on….”(349) But heaven forfend if one of those “average” people becomes compelled to pursue the issue further because no one likes a “professional citizen.”(347) These characterizations recur throughout the book, revealing much about the culture of planning and city bureaucracies. It’s not toxic but it’s not alert either.

Take the topic of housing affordability. In a study of planning for density (aka: housing) this should loom rather large. Beasley neglects empty condos, non-resident money, the impact of speculation, and the distortions widely ascribed to money laundering. When new housing units are treated like chips at the craps table, however, it no longer matters much whether we’ve negotiated the right mix of “market” and social housing. (Perhaps the problem is that Beasley’s people of “modest-income” (129) are not middle-class Vancouverites: they are the poor. Everyone else is in the ‘market’ and it’s devil take the hindmost.) At the very least, Beasley needs to acknowledge that this is a question worthy of pursuit. Another is my neighbourhood.

Just this weekend, more gunfire. There’s been a slew of shootings since the summer in the old downtown eastside (aka: the DTES). There was a fatal knifing and lately a 60 year-old woman was found murdered in her apartment. The Vancouver Police claim that they confiscated roughly 200 firearms in the DTES nine months into 2019. Meanwhile, fentanyl mortalities continue to pile up and the homeless count is something like 2,000. These events are happening not a kilometre from where I live and barely 3km from Beasley’s home. They form the backdrop to my reading of this book.

You know that thing with fortune cookies where you add the words “in bed” to your fortune? I tacked on the words except in the DTES to every celebratory claim in this book.  Back-pats all ‘round because we’ve created wonderfully livable neighbourhoods, vital street life, and a process that balances the goals of developers with those of community and planners…except in the DTES.Beasley claims that a “strong culture of…‘urban connoisseurship’ has been engendered among a significant segment of the community”…except in the DTES (350-1). In a three-page section headed “The Biggest Black Eye in the Whole Story,” he writes, “Looking around [the DTES] today, you might conclude that no one has done anything through the years, which, of course, would be the ultimate indictment for Vancouverism. In fact, such was not the case.” He points to 2003 efforts to curtail the loss of Single Room Accommodations (SRAs) and the rise of the four pillars drug strategy, closing with “God forbid what might be the situation today if the Vancouver Agreement and all of its spinoffs had not happened.” Really? We saw a dead guy. On a discarded sofa. In a public park! How much worse could it get? (Touches wood.) Beasley acknowledges that more needs to be done. He says, with respect to the mental health and addictions crisis that this “plight is a blight on everything that is celebrated in this book” (379) and calls for greater effort in the years going forward. Agreed, but the accelerating tailspin of despair began on his watch. While his planning team was sculpting False Creek into a new urbanism work of art, the challenges of the DTES became increasingly knotty and grotesque. Vancouverism has done much of value for Vancouverites, but all the creative resources that poured into the megaprojects are resources that did not go into the DTES and, yes, that isindictable and a reminder that it’s not down to God to forbid this mess.

Unlike me, Beasley can say (on the first page of the Preface), “I am not a historian.” So he hands the business of setting the historic context to…a journalist. Now, Frances Bula’s done much that I admire but there are literally a dozen actual historians to whom Beasley might have turned and several historical studies he (or Bula) might have read. Robert A.J. McDonald’s Making Vancouver is the ground floor; Will Langford’s work on high modernist planning under Gerald Sutton Brown is not cited, and it should be.[1] It may be hard to find now, but UBC geographer Walter Hardwick’s Vancouvercontextualized and laid out the essential goals and principles of what became Vancouverism in 1974 and thus sets the intellectual if not ideological stage.[2] Much more recently, Jack Little has written on the roles played in and around Vancouver by citizens and citizen groups who were contemporaries of Hardwick and a fresh-faced Larry Beasley: they shared/shaped values in the decade before Expo.[3] Would a deeper immersion in the historiography have made a difference to the book? I think it might have sharpened or at least tested Beasley’s sense of the environment from which Vancouverism arose. It might have given him a greater sense of the dialogue in which this book might fit. Take, for example, the very recent southeast False Creek project, better known as the “Olympic Village.” Beasley writes glowingly on this topic and gives it full marks for sustainability and livability. A 2015 doctoral thesis, however, explores how multiple narratives of “The Village” followed different wavelengths for twelve years, oscillating from innovation and sustainability through “lost opportunities” to “costly mistake” and back again.[4] The point isn’t that the project was badly/well conceived or executed but that Beasley’s narrative is just that: one of several stories that ignores and/or eclipses other more critical versions. Not acknowledging those other histories puts his account in a bubble.

This is a handsome book, much like the urban creations it describes. But its aesthetic brilliance is blind to Vancouverism’s deformities. As a reviewer my first responsibility is to determine whether a book delivers on its promise and this one mostly cannot. It sets out to do too much. And then it does too little. Vancouverism, it turns out, isn’t a citywide vision: it’s really just a few neighbourhoods or, to slightly amend Beasley’s opening line, Vancouverism is a place. If the goal was merely a study of False Creek developments since the 1980s or the planning process, Vancouverismwould be a win, but it doesn’t and so opens itself to criticism. As a citizen and a historian, I’m obliged to ask of the material whether the document is reliable…and on balance it is not. Beasley’s purpose is diffuse and the persistent unwillingness to confront what Vancouverism failed to do is discouraging. It’s a place, could’ve been a win, but it’s all for show.

[3]Jack Little, At the Wilderness Edge: The Rise of the Antidevelopment Movement on Canada’s West Coast(Montréal & Kingston: McGill-Queen’s University Press, 2019), which I reviewed in The Ormsby Review(11 August 2019).