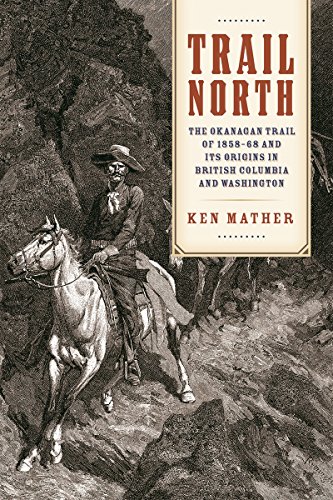 Trail North: The Okanagan Trail of 1858-68 and Its Origins in British Columbia and Washington 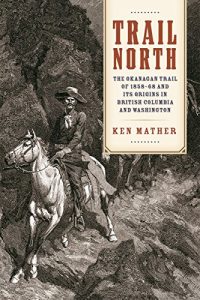 In Trail North, Ken Mather directs our attention to a relatively forgotten part of British Columbian history: the trails linking the interior of British Columbia to the Columbia Plateau of Washington and their contribution to the development of the region during the period of the Fraser River and Cariboo gold rushes.  In so doing, Mather encourages us to look up from the familiar histories of the Douglas Route, the treacherous paths up the Fraser Canyon, or the ill-fated Waddington’s Road to acknowledge the important overland connections east of the Cascades.

In the first chapter, Mather recounts the indigenous history of the trails system.  This chapter is the weakest of the book, suffering from a combination of a paucity of indigenous sources about the trail system and an over-reliance on secondary sources that are beginning to show their age.  From there, Mather’s account builds steam.  He explores the use of the trail system by the HBC and NWC, before it lapsed into relative disuse with the advent of the international border through the former Oregon Territory.  The remaining seven chapters focus on the rapid growth of the trail system between 1858 and 1868 as first gold seekers, and then cattlemen, began to use the trail system to access the upper reaches of the Fraser Canyon and the Cariboo.

Mather’s accomplishment here is quite impressive. There is a reason why this particular aspect of the history of British Columbia and Washington has been virtually ignored until now.  The sources are few and far between and require a detailed knowledge of not only the topography of the area, but also of the economics and logistics of packing and cattle drives.  Indeed, Mather’s chapters on the development of transnational cattle drives along the trail are particularly illuminating and challenge long-held perceptions of Victoria as the “gateway” to British Columbia during this time.  In addition, the chapter on the attempts of the British Columbia colonial government to extend its authority along the border and over the relatively obscure Rock Creek gold rush are useful additions to the oft-told accounts focused on the Fraser River.

Trail North is not without its weaknesses, however.  The terminology can be confusing at times.  The title of the book announces that it is about the “Okanagan Trail” (the original name) but this term is replaced in the book by the “Cariboo Trail” (the later name).  Even more maps would help readers not familiar with the litany of locations described in the book.  The prose also could have been sharpened in places and repetitious passages omitted. Professional historians will likely be frustrated by the limited footnotes, especially as the trail has not had a treatment like this before.