The Regulation of Peace River: A Case Study for River Management 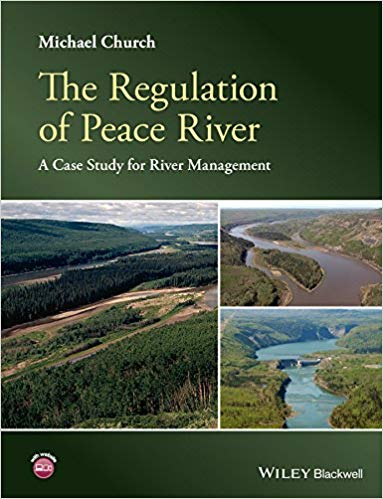 The Peace River is an impressive natural system, flowing from the Rocky Mountains of northeastern British Columbia to the Arctic Ocean, and it has been historically (and prehistorically) a vital part of the region. From serving in the eighteenth century as the boundary between the hostile Dane-zaa and Cree Peoples (see Ridington, Where Happiness Dwells, 100), thus ending decades of unrest (and getting its moniker); to supporting an agricultural boom in the twentieth century, which was quickly followed by the development of local timber and coal industries; and more recently, to mineral, oil, and gas extraction, the Peace River has not only helped shape the communities around it, but has also been physically shaped to address the demands of its surrounding communities and industries.

Starting with the construction of the W.A.C. Bennett Dam in 1967, “the Peace” has been continually, and sometimes considerably, reshaped, through direct human manipulation (especially by building hydroelectric dams and their subsequent reservoir, Williston Lake) and through long-term impacts due to river flow changes. In The Regulation of Peace River: A Case Study for River Management, Michael Church and five contributors capture not only a detailed snapshot of this large northward flowing river in its current state, but also — through an impressive dataset spanning fifty-five years of research including seventeen years of air photographs and hydrological records from prior to the damming of the river — provide one of the most comprehensive longitudinal case studies of the impacts of a major dam on a river of its type to date.

The Regulation of Peace River makes an impressive contribution to the study of the impacts of river regulation (damming) on fluvial geomorphology. It is a useful text for both upper-level students and professionals trying to gain a better understanding of the dynamics at play in a regulated river. Chapters on ice and water flows, aggradation and degradation of the riverbed, vegetation, flooding, hydraulic geometry, and others, provide in-depth detail of the many variables that are impacted by the damming of a river. The book is broken into a very practical set of stand-alone chapters with the research clearly presented through the use of numerous maps (by Eric Leinberger), full colour as well as black and white plates, and clear graphs, tables, and charts. The study methods are clearly laid out in each chapter, and the chapters are truly interesting to read, though this would have been easier if aided by a glossary.

In the prologue, Church explains that the Peace lends two particularly exceptional features to this study: its strong seasonal ice effects, and its similarity to other yet un-dammed rivers around the world. The Peace River, however, is also an exceptional case study for the controversy that surrounds it. The Site C Clean Energy Project, a hydroelectric dam that is in the process of being developed on the Peace less than ten kilometers southwest to Fort St. John, is a contentious project, pitting Treaty 8 First Nations, farmers, and other concerned citizens, against BC Hydro and the province. The science that is presented in this text represents decades of dedicated research, and although it ends with chapters discussing the future state of the Peace River and the implications that this research may have for river management, the author(s) remain silent on the proposed Site C dam.

Church concludes this book by stating that, “Peace River represents an ongoing experiment in the relative influence of water and sediment as governing conditions of river form and process” (272). Clearly, the end of this experiment is nowhere yet in sight, but, in the meantime, Church’s book lays a solid foundation for further learning.