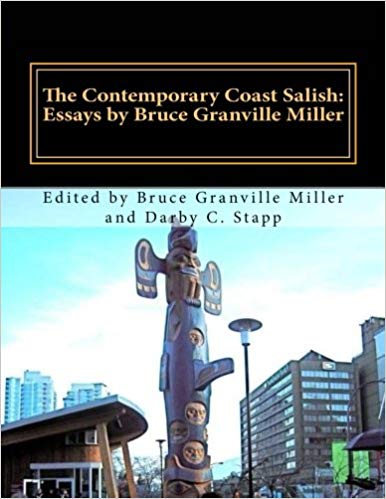 I was a third-year undergraduate at UBC in 1990 when Bruce Miller joined the Department of Anthropology and Sociology, launching his second career after having taught high school.  Between 1991 and 1994 I took several of his classes, worked as his research assistant, and benefitted from his joining my MA committee. My experiences with Bruce were of crossing borders – between archaeology and cultural anthropology, between the US and Canada, between Coast Salish and newcomer understandings. Many of these same concerns are reflected in the themes of this book. Navigating borders, as Miller shows, involves grappling with state power, colonial history, cultural identity, and settler ignorance. The book collects much of Miller’s published work since the 1990s, and academics, public policy folks, legal audiences, as well as Coast Salish communities themselves, will benefit from having the collection under one cover. In addition to nineteen previously published works, the book includes two important new essays and several other brief contributions. These are organized into over eight themes that could be broadly characterized as engaged political anthropology, set in the context of decades-long partnerships with various Coast Salish communities, most significantly those of the Upper Skagit (where Miller did his doctoral research), and several of the Stó:lō communities (where Miller and his graduate students have carried on a close research collaboration for over 25 years).

Several of the chapters stand out with their critical insight into issues that continue to be of pressing concern. Miller and Boxberger’s “Creating Chiefdoms” (chapter 4) crafts a carefully ethnohistorical study to problematize dated anthropological theories that come to be imposed on Coast Salish peoples with ongoing consequences. In a series of chapters on “folk” or “customary” law (7, 9, 11, and 23), Miller works to make Coast Salish law recognizable in contemporary contexts – leading edge work that informs developing legal practices. In chapter 8, “Bringing Culture In,” Miller provides an illuminating discussion of contemporary Coast Salish potlatch, feast, and longhouse practices without treading into the problematic and private areas that might reveal too much, instead sharing insights from historic and contemporary practice that can move the goals of reconciliation forward. His post-9/11 chapters (19 and 20) sensitively relay how the hardened border impacts identity and citizenship, salmon fisheries, health services, and spiritual dignity. The concluding chapter based on his electric plenary talk given at the 2012 Vancouver Island Treaties conference (https://vitreaties.wordpress.com/conference-videos/) is as much about the nature of knowledge and history as it is a consideration of the possibilities of more just and equitable treaty relations in the twenty-first century. With these essays collected in one volume, Miller and Stapp provide readers from within and beyond academia with ready access to critical insights into contemporary life in the Coast Salish world. Only chapter 2, the introduction to another of Miller’s books, seems out of place with its summaries of chapters from another text. The first third of that essay should have been edited out, and the useful (but now ten-year-old) literature review updated with recent scholarship by and with Coast Salish peoples.

What makes this book special is that Miller’s three decades of experience with Coast Salish peoples does not come out of grant-funded academic research programs. Instead, the problems and questions Miller has addressed have, by and large, emerged from communities who have set the research agenda and benefited from Miller’s role as cogent mediator between institutions and communities interacting in the Coast Salish world. From this position, the essays are of vital importance to a major social question faced by society today: the place of culture in seeking social justice and equality within legacies of colonialism.

Throughout the work, Miller maintains his distinctive style, not relying on long quotes or de-centering his own voice, but instead offering a tell-it-like-it-is narrative as commentator, critic, and at times, authority. The essays are in dialogue with trends in academia, often providing a cold counterpoint to fashionable theories – sometimes clearly ahead of their time – and articulating principles that are relevant beyond anthropology, extending into law, public policy and history, or health. Miller challenges us to not be “stuck with the concepts of seasonal rounds, watersheds, or the notion of the historically passive Coast Salish” (339) but rather to embrace a diversity of social theories and disciplinary insights to reconfigure the place of Coast Salish peoples in contemporary society. This position demands that anthropological analysis focus attention on substantive matters of cultural concern, rather than trying to represent or recreate so-called traditional forms of culture. Miller’s approach offers a genuine position for anthropologists to be powerful partners in supporting Indigenous efforts of self-determination. His infectious enthusiasm and socially-grounded research have made important contributions to transforming how the contemporary lives of Coast Salish peoples are represented and understood.