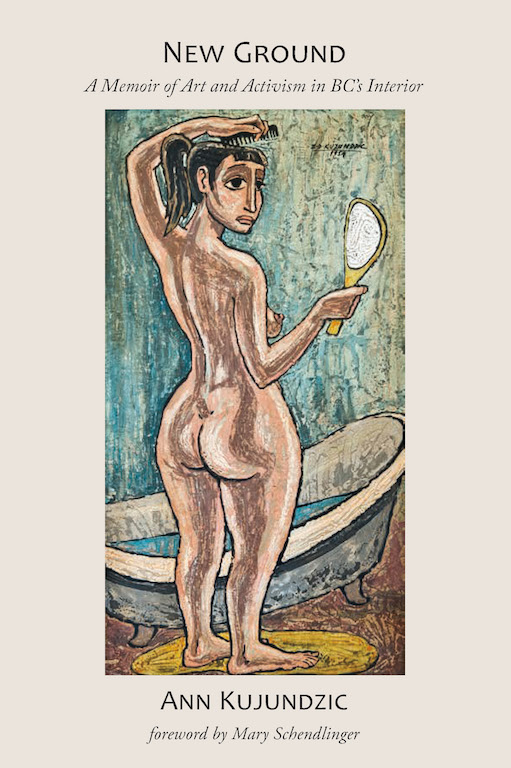 New Ground: A Memoir of Art and Activism in BC’s Interior

New Ground: A Memoir of Art and Activism in BC’s Interior is more than just a memoir about Ann Kujundzic’s life — it is a beautifully crafted encounter with Kujundzic and all of the histories that make her up. Beginning in her early years with what she refers to as “Scottish Roots,” we meet Kujundzic and her family and get a sense of the early memories that informed her growing up in and around Scotland. Here, she tells readers about herself in her writing, which covers landscapes from the Depression era to (before and after) World War Two. One of the most compelling aspects of the book is its ability to think through and make sense of Kujundzic’s life across time, space, politics and deeply personal histories that are expressed through poetics, images and reflective writing.

Each section of the book captures periods of Kujundzic’s life. The text is organized to chronicle important moments of her lived experience. It contributes to fields such as feminist theory and literature, as it centres on the life histories of a woman who breaks through gendered boundaries on her own terms. Kujundzic gives readers the feeling of why stories matter, what we can do with them, and how experience has a significant role to play in writing. Although Kujundzic’s text may not be a typical scholarly work in the sense that it is not set to present ‘data on something,’ her work contributes to feminist theory and practice as she plunges herself into her writing. It illustrates how she transgressed and challenged gendered roles and norms at different points in her life.

This is why I am captivated by Kujundzic’s writing. She is not someone I had previously encountered. But after reading about her life, I feel I know her more intimately. She connects with readers who find themselves resonating with her experiences. Kujundzic doesn’t shy away from sharing difficult moments in her life. This is demonstrated in how she thinks about her activism, especially in the Chapter “Motherhood Should Be A Choice” where she shares her personal testimony in order to break the silence around the question of abortion. In the Afterthoughts, she also notes:

My sense of social justice only gets stronger as I witness more of the struggles our world faces. We need to retool our individual and collective behaviour to respect the earth, which provides our most basic needs, and share our diminishing resources to make our society work for the benefit of all, not just the privileged few (262).

As politically-engaged as Kujundzic is, I wish she had shared more stories and experiences around how she came to activism and social change. As a reader, I wondered about some of her experiences surrounding race and Indigeneity in her early encounters in Canada and the United States. I wanted her to give readers more of a sense of what Indigenous solidarity means to her and what this looks like for her living in Canada. Moreover, how did she understand race operating in the United States when she spent time in Pennsylvania? That said, I appreciated Kujundzic’s honest memoir and her ability to let readers into her life — one filled with family, love, politics and countless encounters with folks met across the world during her many travels.