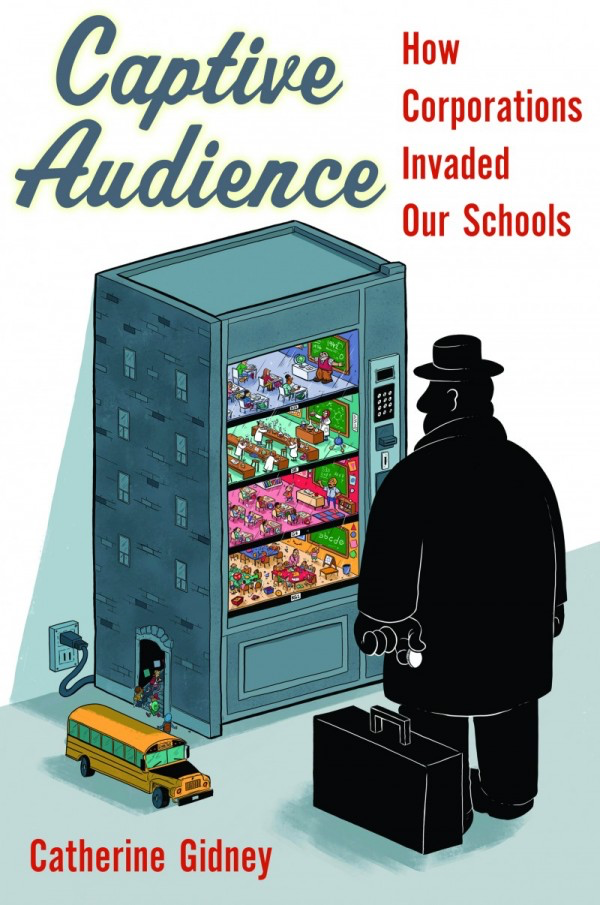 Corporate involvement in Canadian schools is an emotional topic. There are alarmists, like some of the teachers’ federations. They long for public education’s halcyon days and warn vaguely of nefarious “neoliberals” set to “privatize.” There are industry apologists. They say innocently, but unconvincingly, “All we’re trying to do is help youngsters” (the title of this book’s Chapter 7). In this kerfuffle, historian of education Catherine Gidney is calm, cool, and collected. She makes two main claims in Captive Audience. There is no corporate-free golden age to return to, because commercialism in Canadian classrooms is not new. Yet, commercialism in schools has “intensified” (2) since the 1980s or 1990s. She describes this escalation and explains why it should worry us.

Chapter 1 looks at the long history of commercial forays into Canadian classrooms. Teachers in days gone by had a constant need for instructional materials. Recognizing this, and the opportunity it presented, large firms – as early as the 1920s – produced teaching aids. They promoted these aids precisely where teachers desperate for classroom ideas would find them, professional magazines like BC Teacher. They also gave away for free the materials they produced, like maps, notebooks, filmstrips, and wall charts. Outfits like Colgate, Bristol-Myers, and Kleenex/Kotex maker Canadian Cellucotton, branded their free posters and pencils with their logos and slogans. Or, they devised lesson plans around filmstrips and booklets that taught about their product’s virtues. (Shell distributed educational films about oil and the good things it could be made into.) Advertising appeared in high school yearbooks, and snuck into schools in other ways as well. Commercialism gained a grasp in classrooms about a century ago.

The rest of the book’s chapters look at how corporations leveraged teaching aids and a few direct advertisements into a stronger grip on schools starting in the 1980s. There is a chapter on school-business partnerships. There is another on the multi-billion dollar business of selling school boards computers. There are chapters as well on direct advertising in schools, the Youth News Network, vending machines and fast food in cafeterias, and corporate sponsored school improvements, like Vancouver’s school playgrounds brought to you by Home Depot.

What policy, social, economic and other developments since the 1980s or 1990s did all of these endeavours reflect? Gidney names four. The ideological belief that running a school like you run a business can turn a supposedly failing educational system into a succeeding one. The huge demand for microcomputers at a huge cost that schools turned to corporate help to defray. Government spending cuts that prompted schools to look elsewhere for funds. Finally, the colossal spending power of modern youth that made it irresistible for corporations to want to advertise to them day and night, including during school time.

This book is short and very informative. The writing is straightforward. Teachers, parents, policy makers, and even kids, who are interested in the topic can read an academic analysis of it, without having to hack through the “theoretical frameworks,” “methodologies,” “ontologies,” and jargon that densely and regrettably often covers scholarly literature on topics like this one.

Ultimately, Gidney warns that the recent acceleration of schoolhouse commercialism should worry us for some very clear reasons. Schools are priceless for teaching publicly agreed-to values. Corporations are private and have their own values to teach. The more places corporate values are found, including at school, the more possibilities to imagine a different world than a corporate capitalist one are curtailed. Corporations are more powerful than schools and will dominate them in partnerships. Corporate objectives, like material accumulation without much regard to environmental impacts, hinder young people’s well-being. Lastly, as a 5G connected world looms, the possibility to captivate a captive audience and sell to it without any interruption can only grow.